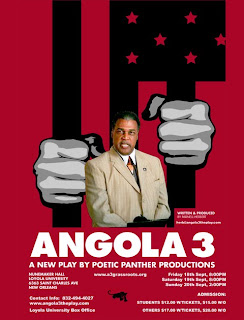 In 1972 three Black Panthers were TARGETED as trouble makers, FRAMED for murders they did not commit and ISOLATED to SOLITARY CONFINEMENT for a total of 101 years and still counting.

Learn what led to this amazing dramatization of this ongoing true life story.

In the early 1970’s, two men Herman Wallace and Albert Woodfox, prisoners of Angola La. penitentiary (the most brutal penitentiary in the at that time) saw a need for change.

As members and organizers of the first and only sanctioned prison based chapter of the Black Panther Party they began organizing anti rape squads, work stoppages, hunger strikes, educational programs and uniting racially divided inmates.

This being considered counter productive by the “Freeman” who depended on the dehumanizing conditions, racial divide, distrust and terror to run daily activities in the prison, these organizers had to be stopped.

In 1972 a guard was murdered and two logical scapegoats were found, Wallace and Woodfox.

Later in 1972 another member of the Black Panther Party, Robert King was transferred to from another prison weeks after the guard was murdered.

Because his reputation as a Black Panther and an organizer preceded him, he was immediately placed in solitary confinement held under investigation for the same murder as his two Comrades.

Those charges were dropped on Mr. King but while he remained in solitary confinement he was eventually framed and charged with the murder of another inmate.

In 2001 after serving 29 years in solitary confinement Mr. King’s verdict was overturned and he was exonerated of those charges. He now dedicates his life to working to free his Comrades and other political prisoners around the world. Mr. King’s focus in life remains “SOCIAL JUSTICE.”

3 was written by Parnell Herbert friend of Robert King and boyhood friend of Albert Woodfox. 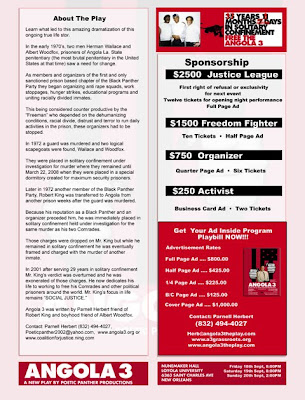